Something New on The Easel

I did realize it's been a while since my last post. Things have been quite rough at this moment. That's life, one day you are feeling like everything goes to the right path and optimistic of almost everything, then something hit you out of no where. It caught you off guard.

Anyway, I did start something new since my last post. I got the rough idea before my new york trip, but I wasn't really sure of how I would put it on my drawing (and eventually canvas). I'm still not happy with the background and the tiny girl in the cage. The overall painting is far from done but it's getting there. It's been a really slow progress with this one, but I'm just grateful that I still have the opportunity to paint. 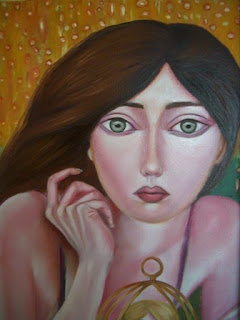 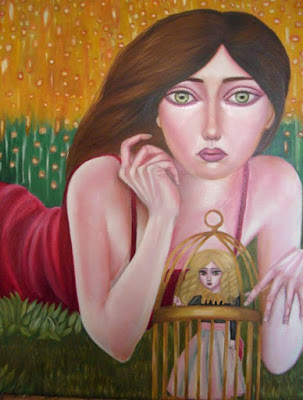 Posted by Heidi Alamanda at 6:31 PM No comments: 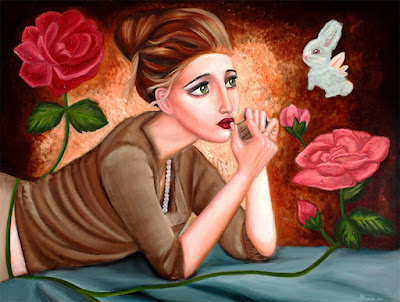 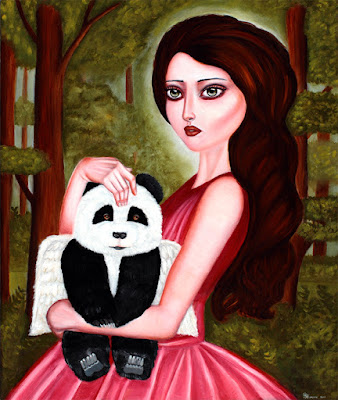 Without You I'll Be Weak
20"x24". oil on linen. 2010
I'm currently starting a new painting. Will keep you updated. Have a wonderful day.
Posted by Heidi Alamanda at 10:57 AM No comments:

Last Thursday was a night that I would never forget. We decided to stay for a night in New York for the show and to check other galleries the next day.
We stayed at Koreatown. I like that part of the city where I can just pretend we're actually in Asia. We had some tasty Korean foods and desserts from a Korean bakery around the hotel before heading out to Paul Kasmin Gallery at Chelsea.
I immediately spotted Mark Ryden and Marion Peck outside the gallery surrounded by some people. He handed out Pink Lincoln pins wrapped in velvet pouch to those people. I asked Mark politely if I could take my picture with him and he just started posing with a big smile. Even better, Marion Peck also joined us in that photo session:) She asked me whether I wanted her to be in the photo or not. She had no idea how happy I was to have her in the photo. Then, he gave those lovely pins, one for me and one for David.

We went inside the gallery and it already started to look a bit crowded. I met Travis Louie, who greeted me with a hug. Then I immediately recognized Mark Elliott behind Travis. Mark Elliott is a very talented artist/illustrator whom I met on facebook.  I knew that he would attend the show but didn't think I could spot him among the crowd. It was really wonderful to meet a super talented and friendly artist like Mark. Mark introduced me to another amazing artist, Mark Garro. We talked for a bit before parting to see Ryden's paintings.

The first room in the gallery showcased Mark Ryden's paintings. On my right hand side, there were "Virgin and Child", and "The Grinder".  "Piano Player", and "Pink Lincoln" were on my left hand side. The huge painting of "Incarnation", which you've seen the time-lapse video circulated over the internet, was placed on the center wall. The next room showcased his sublime graphite and watercolor works, and there was another room where you could see his framed drawing studies.
They're all gorgeous and I just couldn't stop looking at them. We kept moving from one room to another until the gallery felt too hot and humid for us. We got out for some fresh air and returned inside to look some more.
The crowd was a mix. There were some people were really dressed up based on the dress code (Olde Tyme outfits). Some ladies with their parasols and cute old tyme dresses, and gentlemen with their tall hats and fancy suits. Some dressed pretty casual and others, like David and I,  were dressed up but didn't really follow the dress code.

Seeing his show in person has given me a higher appreciation for Mark Ryden. Indeed, his paintings are beautiful and he's no question a very talented artist, but it's more than that. Mark Ryden, as a host, made his guests felt welcomed. He was all smiley for the entire time and looked really attentive to anyone who wanted to have a chat with him, have his signature, or have some photos taken with him.

I felt privileged to be able to see his colossal paintings. Having my photo with Mark Ryden and Marion Peck, his signature on my Fushigi Circus book, and keepsakes from the show, are pretty cool bonuses:) Also, I got to meet some new amazing friends.

The next day, we went to Paul Kasmin gallery again to appreciate Ryden's paintings minus the crowd:) then off to see Shawn Barber's paintings at Joshua Liner Gallery, then headed to Jonathan Levine to see Eric White, Nicola Verlato, Fulvio Di Piazza, and Date Farmers. We swung by at Last Rites gallery intending to check Chet Zar and Ewelina Feruso's works, but we came there too early....the gallery was still closed:( We decided to have lunch at Chelsea and headed to Kinokuniya for some green tea frappes and good books.
I'll post some pics from Joshua Liner and Jonathan Levine on my next post. 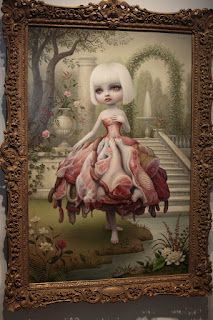 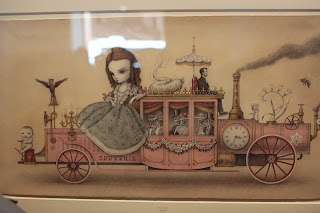 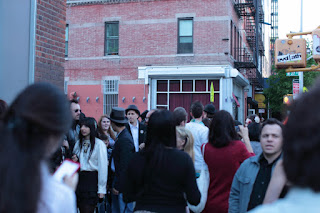 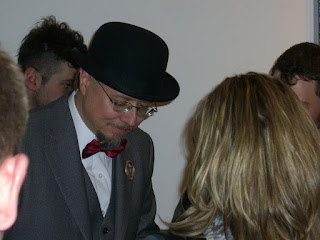 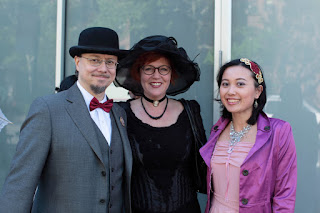 Mark Ryden, Marion Peck and Me 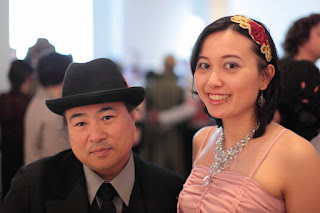 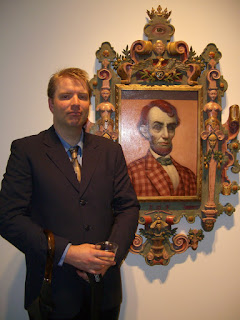 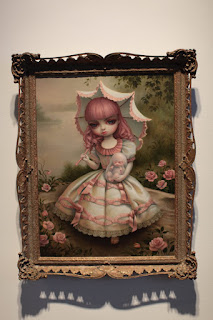 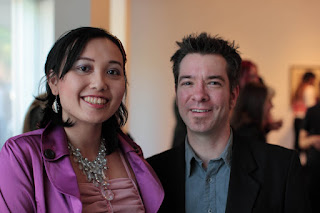 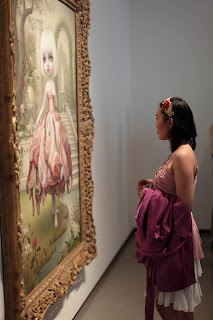 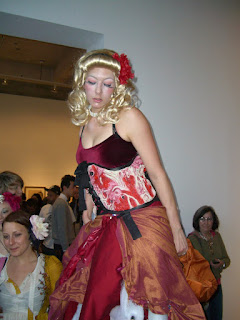 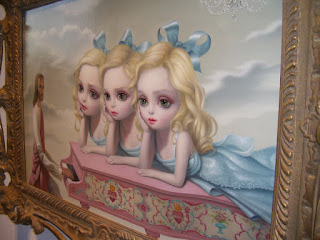 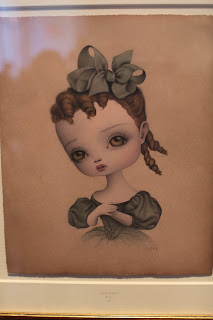 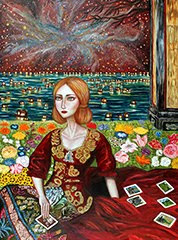 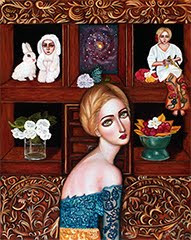 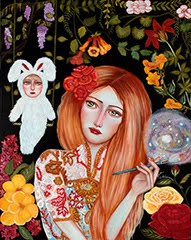 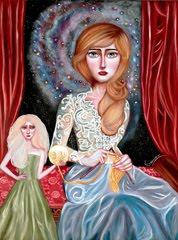 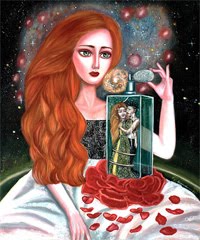 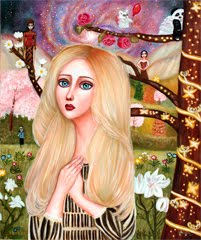 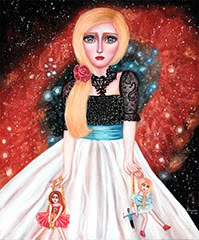 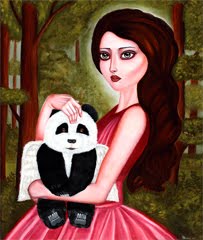 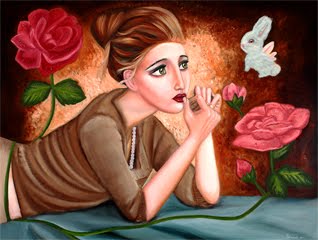 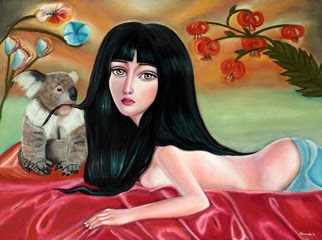 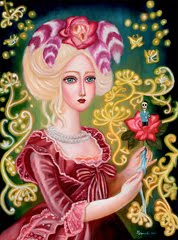